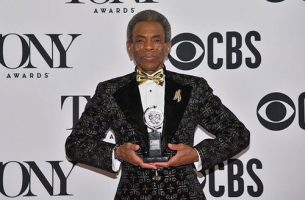 At this year’s Tony Awards, Andre De Shields won the award for Best Featured Actor for his performance in HADESTOWN.  Mr. De Shields is 73 years old and has been acting for half a century.  And this was his first Tony!

His beautiful acceptance speech has been widely quoted.  In case you didn’t see it, you should!  And if you’ve read it elsewhere, well, it deserves a second read!

These were his three words of advice:

All three statements are beautiful. But I was especially moved by his first item.  Let me add a couple of thoughts that it prompted in me.

Once upon a time, I was part of a group planning a new project.  We thought we ought to “test” the idea, and toward that end we talked to an organizational consultant.  One of our members said: “We’ll need to test it with folks you don’t usually like things like this, of course, just to be sure.”  “Why,” asked the consultant.  “Why increase your chance of failure?  Focus your energy where you’re most likely to succeed.  Maybe others will follow, maybe they won’t.  But you’ll so something good in either case!  When in doubt, go for success!”

And once, from a friend, I heard this nugget of wisdom: “When you’re suffering, it can feel like your hand is suspended over a burning candle.  And if you’re a religious person, you might pray: ’Dear Lord, free me from this pain!’  I do think God answers that prayer,” said my friend.  “Sometimes, no doubt, the divine comes as a mighty wind and blows out the candle.  But other times, the divine comes as a gentle breeze, whispering in your ear: “Move your hand, dummy!”

Contrary to the American myth, no one ever succeeds on their own, or by themselves.  So, weave yourself into a community of positive thoughts, abiding love, and sincere support.    And even if you don’t make it to the Tony’s, you’ll be a prize-winner in life!

« Twenty Three
The results of a reading… »