Most of you know that we spend January and February in Thailand.  Usually, it is a quiet time for us to relax, recoup and lazily do some work via the internet. In particular, it is a time to reflect and imagine for me.

For example, during this period two years ago I created the character of Schmedrick in THE LAND OF FORGOTTEN TOYS.  The writers convinced me that we needed a semi-love interest in the show.  So, I thought about it for a while and imagined what this character looked like, how he behaved and mostly – what he wanted in the world we created.

Still, every trip for us is a little different.  Our current trip is a great example. 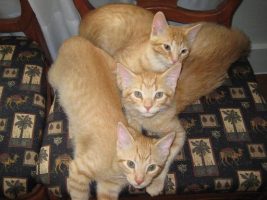 About a week after we arrived a set of triplet boy kittens (about 3 months old) came and visited us in our villa.  They were clearly brothers as they looked identical.  They were clearly being taken care of by someone even though they were outdoor cats.  Day after day, they provide us with joy as we watch them wrestle, play, jump and very clumsily climb trees.  Sometimes it seems they dance.  It brings me peace and comfort watching them.

And then, about a week later, I heard something I had never heard before where we stay.  I heard an elephant trumpet.  At first, I was unsure but then a second one happened and I was positive.  There are a couple of elephant sanctuaries near here but, nonetheless, I have never heard an elephant roar while we were in our room.

Perhaps it was an elephant being transported to a new free roaming home. They usually make that sound when they are excited or stimulated.  You see, elephants have been used as beasts of burden in Thailand and in amusement parks for a long time.  That is changing.   With plows being reasonably priced and many amusement parks that use elephants closing down, elephants are now being “rescued” and sent to live their lives in sanctuary parks.  No chains, no hooks, but plenty of food and most important – other elephants.  Elephants are a matriarchal society – the females run the herd – and are very social animals.

What does all this have to do with musical theatre?   Well…when kittens dance in front of me and elephants sound the alarm of enthusiasm…I see theatre.  Maybe in a year or so, you’ll see some new kitten-like or happily-trumpeting character.  And you’ll know exactly where it came from!

« It takes a Village – a HUGE village!
I Sing The Body Electric! »